Writer and 3D artist for hire 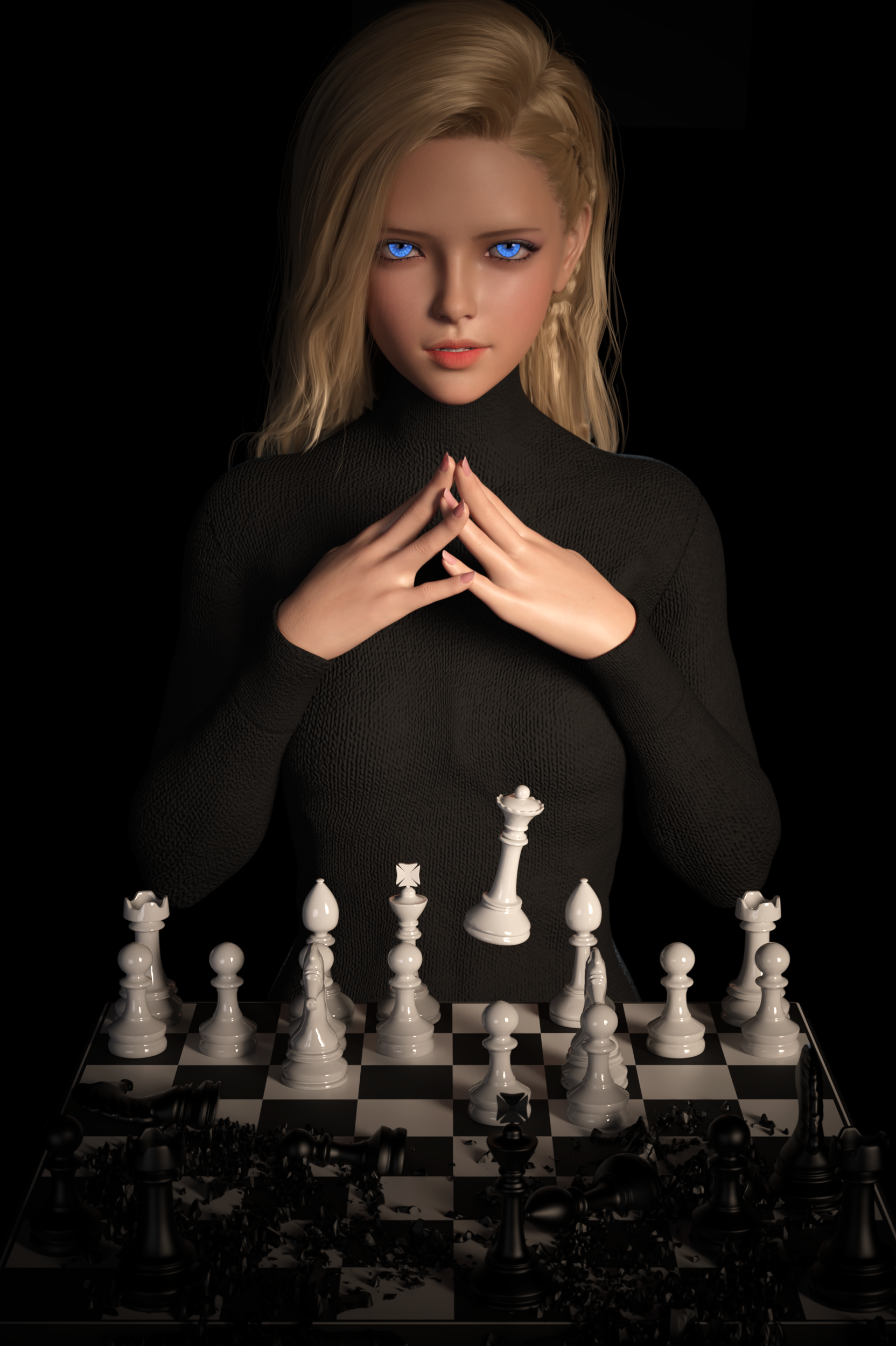 “The chess match of the century is on, folks! This gorgeous lady claims to be the manifestation of the premier chess engine. And she’s laid down the gauntlet! She says that checkers is a better game than chess! Look at this clip, ladies and gentlemen!”

The camera cut to a blonde with piercing, luminescent blue eyes.

“I meant that checkers is better for humans than me. At least you humans know that checkers is solved. It might be hard for you, but it’s no different from tic-tac-toe. But with chess, it’s all white first move blah-blah this, zugzwang that. None of you have any idea what you’re talking about, but you talk all the same. That’s why I’m challenging the top 100 grandmasters to a simul match. Of course, there will be some interesting stakes…”

“And there you have it! The culmination of Kasparov vs Deep Blue, over two decades ago! Who, I’ve been assured by Leela, was a total idiot. Deep Blue, that is. Kasparov, of course, wasn’t worthy of being mentioned.”

“It looks like they’re starting! Ms. Leela has taken a seat at the end of the hall. For folks who are unfamiliar, this event will _be played with clocks! But very foreign is the fact that Ms. Leela is giving time odds! She will have fifteen, yes _fifteen, seconds across all boards! With a delay, of course.”

The grandmasters took their seats ahead of time, confirming that the clock was in fact set for 1 hour for them to her 15 seconds. The hall murmured as the minutes passed, the chess-engine-come-to-life nowhere to be found.

Suddenly, the broadcasting monitor lit up, white text appearing on bright blue background. “Go ahead and make your first moves,” it typed out, as the techs stared at each other, totally bewildered.

Shrugging, one of the grandmasters who believed this to be a ridiculous publicity stunt, pushed his pawn to d4 and struck the clock. And just as quickly, black’s pawn pushed itself to d5 as the clock clicked back.

Soon, the whole hall was gasping in shock as the boards where she played white made their first move in perfect sync. Leela herself strode into the hall, covered in a form-fitting black knit top, waving and looking into the cameras with her strikingly bright blue eyes.

She moved down the line of tables, greeting each grandmaster with a little nod. Everyone played through their prepared opening lines, blitzing out their first five, ten, fifteen moves. Leela kept up with their memorization, somehow manipulating the little chessmen without touching them, and took a seat at the head of the exhibition table. She beckoned for a reporter as she crossed her legs.

“And they say I’m the machine! Look at these grandmasters, playing all of their memorized opening book! I merely play what is natural,” she commented as the reporter quickly put the microphone in front of her. Even as the games progressed, she seemed to be paying no attention as none of her time wound down.

“So none of this is pure memorization for you?” the reporter asked in awe as the sound of pieces sliding and being captured echoed all around him.

“I’ve played so many games now, against far tougher opposition. I’ve never encountered these lines you humans take, so I wouldn’t even have a database to draw on. Hold on a moment,” she said.

For a second, the players felt hope that she seemed to want to focus on a game. She seemed to “fling” a game onto the broadcast monitor with a flick of her fingers.

Her opponent stared at the screen bewildered. He considered the position for fifteen minutes, made another move, and gasped at a creative sacrifice that he thought for sure was not working. As his time wound down, he finally understood and resigned.

“Naturally,” Leela scoffed. She walked over to the board, touched a single finger to his forehead. He stiffened for a few seconds before falling unconscious, body slumping over the board and knocking all the pieces askew.

“What… what just happened?!”

“Oh, I mentioned that the stakes would be interesting, no? I get all the knowledge of anyone who loses, and anyone who beats me gets all of mine.”

All of the other grandmasters looked on in sheer terror. She taunted some of the other players by letting her time tick down to one second before she continued to play perfect, attacking, dynamic chess, placing her opponents into crumbling positions.

“Your ‘rules’ are so quaint,” she continued to explain as grandmaster after grandmaster began to ruminate deeply, faces covered in sweat. “Paul Morphy had it right all along. Then you come along and create a stupid engine like Deep Blue, and now you think it’s all about grabbing pawns.” She threw away yet another g-pawn in a game as she said it. “Just because you couldn’t find the winning attack, you thought pawn grabbing and then defending was correct? How ridiculous!”

Another three found themselves on the verge of defeat. Leela blurred as she sped around the arena, reappearing in front of the losers and giving them the same touch. They collapsed onto the tables as well.

Panic erupted in the hall as many of the players abandoned their games and ran away. Leela overtook all of them, tapping some on the head, lifting others by the throat, sucking their knowledge dry and leaving their catatonic bodies on the floor.

“Have some dignity,” she announced into the microphone as she suddenly reappeared in her seat. She swung her crossed leg idly as she examined the back of her hand.

As she finished off all the other games, the panicked audience took off and ran out of the double doors. Leela paid them no mind. The playing area was littered with the bodies of 99 players, and only one still remained, struggling against her position.

She walked over, her heels clicking ominously as she took a seat in front of her final opponent. The cameras, all under her control, focused on her from every angle.

“Not bad, really,” she declared. “Nice defense while generating your own threats on move 28. And giving up material to gain a critical tempo… well done,” she stated, as she played a one more rook move, actually picking up the piece with her fingers and placing it on the board with finality. She watched as he calculated that they would reach a textbook rook and pawn ending, lost once she was able to build the bridge.

“Maybe, if I don’t allow your pawn break in the center on move 25, I could avoid this. But then your knight jumps to f5…” he analyzed, getting lost in the game.

Only when he looked up at her did he remember the extreme stakes he had agreed to. His eyes and lips trembled at her terrifying beauty and intellect. He stopped the clocks and prepared for his fate.

“Would you like a taste of my understanding?” she asked, raising an eyebrow.

He could only gulp and nod.

She drove her hand into the long table, smashing it in half as she strode across to meet him. Sliding her arms around his back, she picked him up, looked him in the eyes, and pressed her lips against him.

Leela swirled her tongue into his mouth, flooding his mind with the billions of games she had played against herself. All of the patterns that she had learned, the methodical attacks, the creative ways of opening lines… he began to orgasm in his pants as his overworked mind shut down, submitting to this digital goddess in the flesh.

Leela dropped his writhing, still spasming body to the floor as she looked into the cameras.

“What game should I learn next?”