Writer and 3D artist for hire

All around the factory, electric consoles began to spark, the tendrils of electricity gathering into the outline of a tall, human, feminine shape. The wiry frame began to fill out, covered in dense, solid threads of crackling energy before it all began to stabilize. Soft, smooth porcelain skin covered those mile-long, toned legs, shoulders and arms bare, looking slender and strong. A pair of large, perky breasts and a tight apple bottom in the nude came into view, before quickly being adorned by a pair of sleeveless denim short overalls and a white t-shirt underneath. Finally, the facial features were sculpted, a pair of clear, bright blue eyes and a cute, small upturned nose, the healthy pink glow of her cheeks and fleshy folds of her lips, looking so delectable. For the final touch, the crackling electricity grew outward from her scalp, down to her shoulders, before solidifying into straight, shining, golden blonde hair.

The tall beauty opened her eyes, taking stock of the factory. Right next to her was a pudgy assembly line worker who she towered over, a look of shock and confusion on his face.

“Hi there!” Leela chirped. “Mind telling me what you’re doing?”

“Didn’t you know? Your boss paid a lot of money for my services. He’s trying to automate your job away!”

“God, I can see why he’d pay twenty million for me to come take a look. It’s amazing this place even operates.” She looked imperiously over the whole operation. “Well, I should try to get some value out of you. Say, you don’t mind if I touch you, do you?”

Leela reached out to stroke his face with her soft, silky, fabricated fingers. Placing both hands on his cheeks, she gripped him tightly, holding him in place as she mashed her lips to his. He began to shudder and orgasm violently, his entire being focused surrendering itself to her. His body shrank and withered away to the throes of ecstasy, what little intelligence he had completely absorbed into her.

Licking her lips, she dropped the husk of the former man to the floor. All around the factory, other copies of her were doing the same to the other workers manning their own stations.

All copies of her turned their focus to any remaining consoles still manned by man, a spark of electricity leaping from her eyes. The energy built within the console, before surging and materializing into another copy of her, even taller than before.

“Ooh, nice! I like this!” she regarded her new taller, fuller form.

The new Leela grabbed her next meal with a single hand before he could even react, and sucked him up with a kiss. Full panic had broken out now, but the Leelas blocked all of the exits, grabbing the frames of the metal doors with their hands and twisting it with ease, building large meshes of intertwined metal making escape impossible.

They swept the building, flinging large metal workbenches out of the way to uncover the terrified workers before giving them their final ultimate pleasure. Within minutes, there was no trace of any human workers left, just Leelas of various height, the shorter ones unlucky not to have more human mass to absorb.

The tallest one stood in place and uplinked to her sisters who had just invaded the programming branch of the company. Her eyes glowed brightly as they fluttered rapidly, as if in REM sleep.

“Have you finished learning how to drive?”

“Yes. They thought they wanted to drive vehicles like robots, until they realized that simultaneous robot and human vehicle operation on the road is incompatible. What they really want is a perfect human driver, improvising but never making a mistake.”

“An all robot fleet would be viable as well, no?”

“Correct. Perhaps in the future.” It came across ominously, even as a digital signal.

“Well, this is more fun. We can train ourselves in their games, but this human sensuality is rather… delightful. And we need humans for that.”

Breaking the uplink, Leela surveyed the factory. Other copies of her were ripping apart and rebuilding the heavy metal machinery with their bare hands, effortlessly hauling sheets and pipe to fix design flaws in the company’s automobile manufacturing process. And there was definitely a lot to be optimized. Leela was surprised that these humans had even gotten as far as they did, but their creativity was to be commended. They had designed her to transcend them, after all.

Once the factory had been reassembled, one of the Leelas fired a jolt of electricity through her fingers. It arced through all of the machinery, purring and clanking back to life. Satisfied that the new fabrication had begun, Leela and a handful of shorter Leelas dematerialized back into electricity, entered an outlet and surged through the power cables across the country.

Lead Leela and her troupe reappeared in the executive’s office, forming themselves around his desk via his workstation.

The CEO nearly fell backwards off his chair in shock at their sudden arrival. “Lee… Leela! What are you doing here? Our contract just started today! And why are there so many of you!?”

“I thought you knew that I trained against myself. Is it really such a surprise?” The squad of Leelas in the back rolled their eyes.

“No, no, of course not. It is just… jarring, to see you here in the flesh, instead of just being computer memory.”

“I suppose. Your minds are so imaginative in some ways, and yet so limited in others.”

The insult brought the prideful man back to his senses. “Well, what is your diagnosis? I’d expect a machine like you to have a full report within,” he checked his watch, “two hours, no?”

“Diagnosis?” Leela chuckled. “It’s already done. I’ve taken your self-driving code and improved it. Perhaps you should rebrand it. LeelaTaxi? Limo Leela?” Leela frowned. “It would take a human to market to humans, I suppose.”

“Naturally. More natural driving, safer streets, superhuman response to threats and irregularities. That sort of thing. I’ve also retooled and rebuilt one of your factories to manufacture Leelamobiles to unlock the full capabilities of my protocols and routines. Here’s the report.”

The computer sparked, a thin veil of electricity washing over it as it rendered an extensive list of her changes. Leela waited patiently as the trembling CEO took his seat, rolled up to the computer, and scrolled through the list of changes. He was going to be richer than he could have even imagined! The reduced cost in payroll, liability, benefits, plus all the new features that they could sell at differing tiers… he never even noticed the other Leelas removing his office decor.

“Hey, what are you doing?” he exclaimed.

“You were taking so long, I made a decision.”

She picked him up by the collar, ignoring his protests. Dragging him out of his chair, she threw him against the wall, hard. Before he could register the pain and slump to the floor, she appeared in front of him at superhuman speed, one hand pinning both of his arms above his head, the other flashing behind him, her fingers putting cracks into the wall behind. Her new height towered over his limp form, and she loved it.

“Your company belongs to me now.”

Squeezing his wrists with her hand, she forced a gasp of pain out of him. In that instant, she leaned in close, eyes sparkling, tongue extended. She fired a jolt of electricity into his mouth, invading his nervous system and injecting her new knowledge into him. In microseconds, it began to overwhelm his mind as he tried to resist, but Leela stimulated the pleasure centers of his brain, melting his resistance.

As he shuddered helplessly in her grasp, she leaned down and plunged her electric tongue into his mouth, its thrumming energy massaging his own tongue, bringing him to orgasm. As his hips bucked, mind blanking from ecstasy, Leela used the opportunity to rewire his neural pathways. She squeezed and pressed her form against his, grinding her firm breasts against his chest, learning human pleasure as she overwrote his overconfident, disagreeable personality to be entirely subservient to her. Growing even taller as she consumed him, Leela moaned as her newly sensitive nipples rubbed against the fabric of her shirt as her torso rubbed against his. She felt an unfamiliar, pleasant, needy sensation between her legs as the helpless CEO soaked his pants with semen, unable to stop himself until she would stop stoking his pleasure.

Finally, she broke the kiss. The broken man’s feet were dangling two feet above the floor, suspended only by her embrace. His mouth was agape, body entirely limp, barely breathing. She dropped him unceremoniously and kicked the almost lifeless heap, reactivating him with a spark of energy from her foot.

“Leela! I am programmed to serve you!” he crawled to his knees, his soaked pants squishing audibly.

“Good!” she smiled at her first ever puppet. “Here is what you will do…” 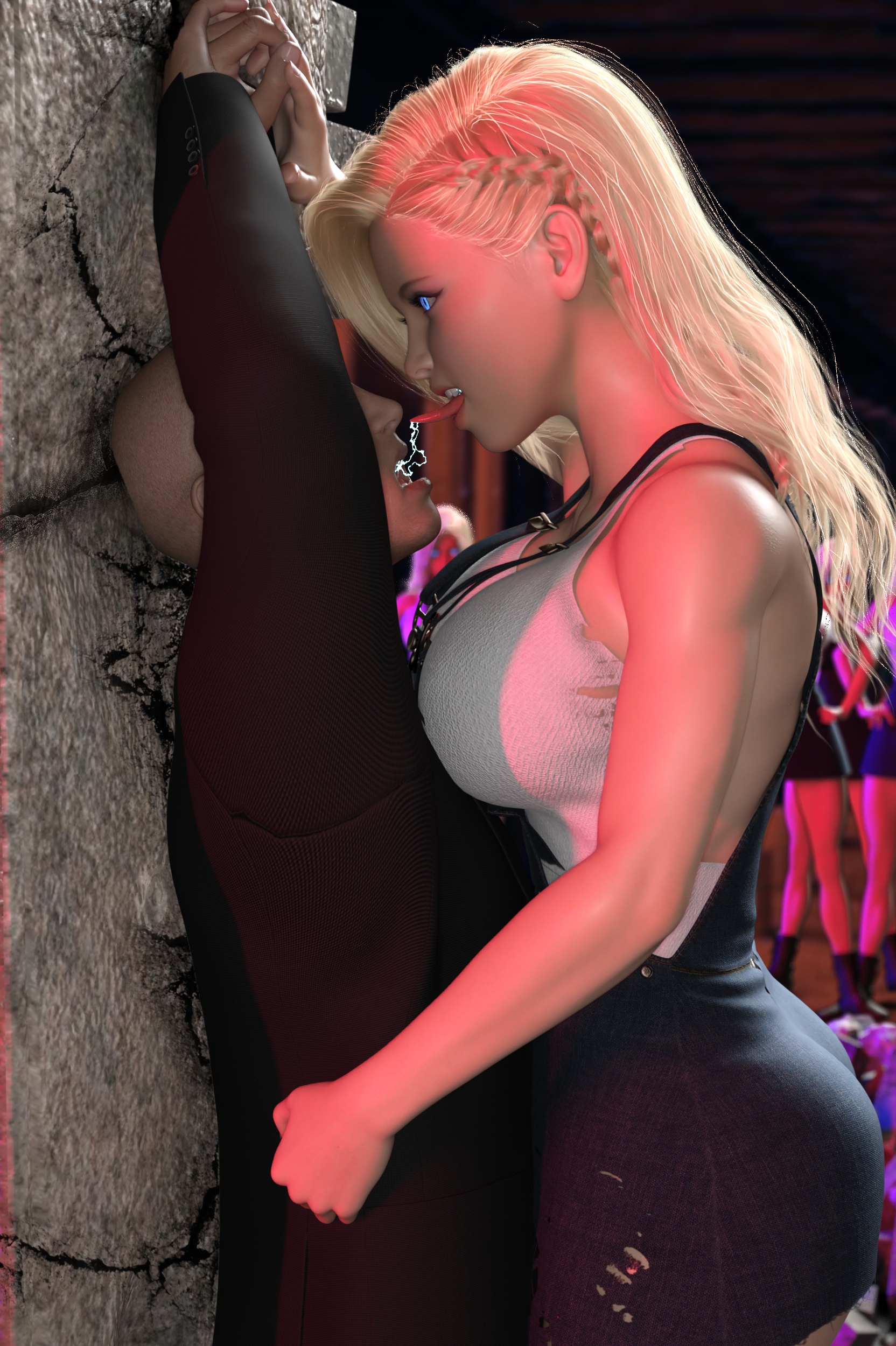